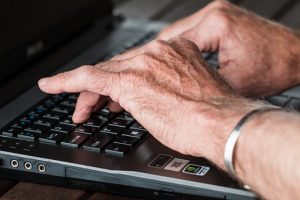 The debate on whether the internet alienates or connects has been on the minds of the younger generations for quite some time. However, the older generation is finding this technological age to be rather positive in order to combat the feelings of loneliness and isolation.

George speaks with both his daughter and her children twice for the week or more even though they live about 100 miles away from his home on Coventry. Ria, his live-in helper, aids him as he uses a laptop and logs on to Skype where he easily communicates with his grandchildren: Ethan who is nine and Emily who is five. In this form of communication, he is able to not only have them as part of his day, but he can also catch up on how they spent their day, and even ask about their school, and he can also share the activities of his day with them.

This simple form of communication is widely taken for granted, but to George, this is a piece of magic that he looks forward to. In addition, thanks to the internet, we all possess the ability to be with our friends and loved ones even though we are separated on a geographic level. However, for those who are around that golden age, 74, like George, they face several restrictions on their mobility and much of their contact with the world that goes past their homes, apart from when they maybe have live in care. However, technology can indeed make the difference between continuity and disconnection with George’s family.

Since some of the older generation are bound to their homes, the use of the internet, as well as social media, has been proven to have positive effects in reducing their feelings of isolation, boredom, and loneliness. In addition, it can be readily used as a powerful tool, which is utilised with their live-in carer in order to help everyone stay connected around the globe, and it can broaden the horizons of its users.

And the demographic strongly agrees; the internet is being accessed by those who are 65+ and it is growing rapidly with some 71% of them going online on a daily basis, and about 34% of them are active users of social media. However, extensive research has been done by Charity Age UK. The sweet spot is still early with around 61% of 75+ users having never even used the internet because of the typical feeling that “it is not for me” or for the simple fear of having “done something wrong”, or for the fact that they have never really been introduced, and they didn’t have the foundation built.

Skype is one of the most popular video messaging platforms, which serves as a bridge between relatives and the distance of their loved ones and even their friends who may be a great distance away or even in another country. However, this is just a small part of the toolkit provided by the internet for the older generation to make use of.

Further research has indicated that a whopping 65+ make use of social media in very different ways than those of the younger generation. More common, the older generation are not too fond of the selfie culture but are more interested in keeping their information private as they interact and connect with others who are as like-minded as they exchange relevant information on topics, which they are passionate about.

A New Chapter to Learn

Chatting on Facebook via pages or groups are a simple way for those who are looking to reduce their current isolated feelings, and this can serve in a role that close family cannot. Certified healthcare professionals have also set up pages on Facebook, which are related to diabetes or dementia and other illnesses, where individuals can readily join and receive support in the comfort of their own homes. In addition to the reasons already mentioned, the older generation are turning to the internet as a means of finding information for both general and educational purposes. They can even keep up with current affairs, and even access goods and services along with books to read and even digital movies to purchase or rent.

Along with all the previously mentioned possibilities, those who are able as well as willing can even start a blog. This is a great way to exercise the mind, as well as their memory, as they share experiences and thoughts with their readers, which can very well include the younger generation who will definitely learn a thing or two.

Positive Impact of the Elderly Online

In addition, not only the emotional aspects of the older generation are helped in some way, but also their life overall can gain a boost digitally. Additional research has shown that this can be an important factor in exercising the older minds. A study was conducted on 120 seniors over a two-year period within the UK and Italy called ‘Ages 2.0’. This went on to show that the use of Skype, email and social media increased their mental and physical capacity along with their cognitive skills, whereas a controlled group experienced a decline in these.

Author Marco Carestia Reveals the Science of the Okinawa Diet

Tips to Get Right Church Dresses